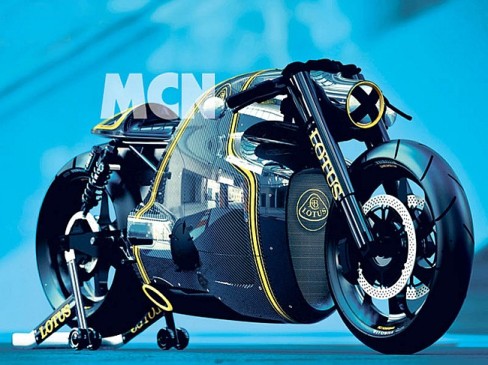 The British weekly Motorcycle News has published the first photos of the first Lotus sports motorcycle. According to the publication, the first prototypes and roll and reaching an elite sector of the market could occur sooner than expected. The designation C-01 has been chosen for the first frame of Lotus, which according to sources close to the project forward is driven by a V-twin engine that delivers about 200 hp. Thus, the C-01 would be the first motorcycle manufactured under license from Lotus.

The British brand announced in June last year his impending foray into the motorcycle industry, promising both a first model of 200 hp that would be marketed in late 2013 and early 2014, but until now had not leaked any image prototype.

After reviewing these first pictures, the theory of super sports can compete with the BMW S 1000 RR and Aprilia RSV4 had created such excitement that last year has vanished by itself, since the C-01 is more like a “muscle bike” to a sport.

That the Lotus C-01 is more like a Harley-Davidson V Rod that a real Superbike may have meant a disappointment for those who expected a product of the style of the MV Agusta F4. However, in C-01 have been used like carbon fiber and titanium and steel from the aerospace industry and in Formula 1. Now get to find out more technical details of the new model and other details such as price, although we fear that it will be prohibitive for 99.9% of the pockets.