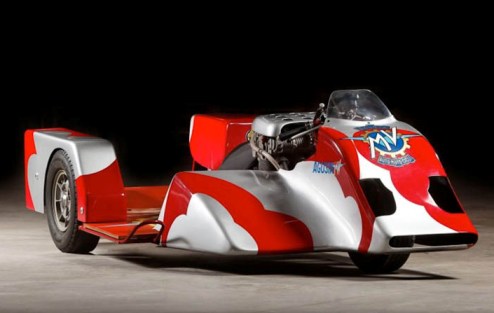 During the last show of Retromobile, held at from 5 to 9 February in Paris was auctioned one of those unique pieces and therefore hard to find, it is a sidecar with MV Agusta engine of the late 70s that competed in World. Their value amounted to €59,600. All fans to the world of speed on two wheels must know that without MV Agusta the world motorcycle would have been very different. Maybe big stars like John Surtees, Mike Hailwood, Giacomo Agostini, Phil Read, had not achieved the titles that made them such. What is less known is the inclusion that the Italian firm had in the World Sidecars in the 70s. It’s also true that one could say that its appearance was merely anecdotal, it is speculated that only three units were built, although no reliable data. What it is clear is that it is the only one of them has been preserved until today.

On this model in question could have been used in 1977 and 1978 by Guy Bongiovanni, pilot of “sides” of the time. Bongiovanni was MV Agusta importer in Lyon and was responsible for preparing a chassis on which to mount the 750 cc and MV Agusta 4-cylinder engine.

At that time the world of Side had great popularity and the vehicle structure, both outside and inside resembled a motorcycle with sidecar, with the engine in the front of the vehicle. Shortly after models and began to be a cross between motorcycle and car and chassis manufacturers began to take charge of Formula 3.

Taking into account the perfect condition of the machine after being restored the owners hoped to reach a figure between €60,000 to €100,000 for sale. A quantity that were about to reach with the not inconsiderable figure of €59,600