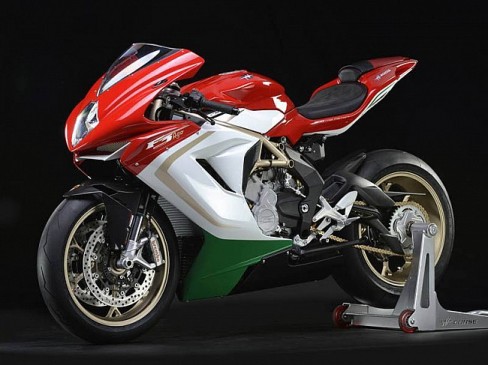 The legendary Italian brand expands its range with an exclusive limited series of F3 800 Supersport dedicated to the 15-time world champion, Giacomo Agostini. 300 units will be produced and will be released with a price of 23,990 euros. Giacomo Agostini (Brescia, Italy 1942) is the most successful driver in the history of motorcycling, fifteen World Championships in category 350 and 500 cc. His first world got it in 1966 with the MV Agusta in the category of 500 cc, mark that accompanied him until 1973 getting 13 world titles, for all that he was appointed ambassador of the Italian brand worldwide.

The brand already presented in Varese last EICMA 2013 this exclusive sport with 798 cc three-cylinder and 148 HP. Those fortunate enough who have access to any of the 300 units to be manufactured will be an autograph of Agostini in the tank, plus certificate signed by himself, as happened 2005 F4 1000.

In addition to the “100% Italian decoration”, its high price compared to the standard F3 800 is given by the adoption of exclusive parts and materials such as carbon fiber in fairings, keel and fender (which reduces its weight two kilos, staying in 173 kg dry) as well as golden forged aluminum wheels, gold chassis and logos of the Italian pilot. To authenticate the jewel, it will take a silver plate on the seat of the address with their corresponding serial numbers between 1 and 300.