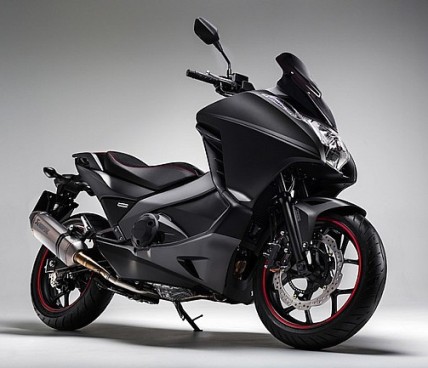 The new Honda Integra Sport takes a much more aggressive with the unique equipment specially designed for this model. Finished in matt black with red accents and will be available only in the version of 51hp for €9,399. Honda has just announced the launch of a new version of the versatile scooter Integra. In matt black, the new Integra Sport strengthens its new look with red accents such as embroidery seat (with special appearance Alcantara upholstery) and adhesives from the edge of the rim, with the logo “Honda Racing” on them.

But there’s not only cosmetic changes: a new muffler “Slip On” Akrapovic Titanium Brand and a smoked screen, shorter signed by Barracuda further accentuate the sporty character of the new Integra.

Mechanically, the Integra Sport, as its “brothers of range”, used 670cc twin-cylinder engine. But while the Integra offers the possibility of 51hp and 47hp engines (for drivers with A2 license), the Sport will, for now, restricted only to those who have the card A: Honda engine mounts only version 51CV for Integra Sport.

Available now in the Honda showroom, the recommended retail price is set at €9,399, remaining in €8,999 the regular version, and €9,199 as a promotional price of Integra Touring version of 35Kw (47Cv) with bags and Top Box included.