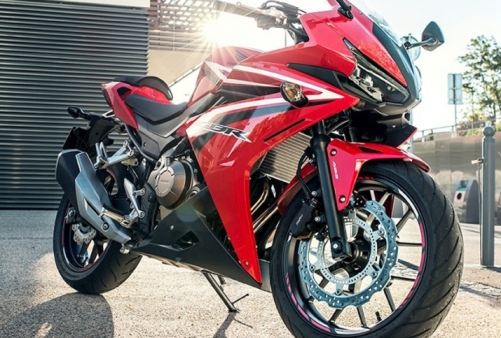 Honda has chosen the Hall of Orlando in Florida (USA), to present a new version of its 2016 CBR500R. Aesthetically it stands out for its fairing remodeled with more sharp and aggressive lines, with a new light cluster with two front LED headlamps and much torn forms. Dome also announced greater protection which benefits the comfort of its pilot.

Other notable changes are the shortest and lightest muffler, and also emits a more serious sound, a larger fuel tank capacity (15.5 liters) equipped with hinged cap, and a fork with new settings and with the possibility of adjusting the preload of its docks.

It also includes “wave” type key switch, smaller and more robust, as well as a brake lever which allows to be regulated and a rear optical group of LEDs. The declared for the whole weight is 193 kg in running order.

Parallel twin engine of 471 cc announced improvements in the operation of the gearbox, keeping the same 35 kW peak power of its predecessor. Thus there remains a perfect bike to be driven with A2 permission, without being limited. The marketing of this new CBR500R will begin in early 2016.