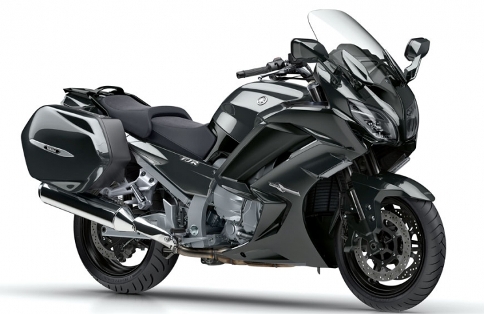 Looking ahead to 2016, the new views on the Milan Show, Yamaha added an update to their FJR1300. Most notably, along with significant facelift especially in the front, it is the addition of anti-lock clutch, headlamps with LED technology and a new change of six relationships that replaces the earlier 5. What does not change is the fact that can continue choosing between three different versions of the Japanese sport tourism: A, with ABS and conventional fork, AS, with a stiffer inverted fork is also, as the damper, electronically adjustable and AE, equipped with the suspensions of the AS, but with an electro-hydraulic clutch that dispenses with the left handle.

Sportier and 6th
The intention when retouching on them, has been to insufflate some sporty touches here and there, in line with the greater dynamism offered by the new gearbox and A&A anti-lock clutch. The latter has been completely redesigned in order to promote the dynamism of its great tourism, now offering a relationship more effective on twisty roads, while the inclusion of the sixth enable more at ease and economy cruises. Despite having a couple of sprockets, it is 400 gm lighter and their teeth are helical for greater finesse.

At the time, Yamaha has used to replace the previous one clutch lock system, based on the YZF-R1 of the previous generation, which facilitates the sport driving. By the way, the A&A clutch – assisted and anti bounce – permits the use of softer springs, which reduces the effort the rider to actuate the handle. The rest of the engine and the secondary shaft drive have not been changed. Its power, is maintained in the previous 144 hp declared to move 289 kilos in the case of A version, and 296 to the AS, 292 in the case of the AE.

Adaptive lights
As mentioned, Yamaha has changed the face of their FJR, giving them a new dual optic headlight. At the bottom we find two pairs of LED, in which the external projected low-beam headlights and the internal officiate in long-range light. Above, a few rows of LED make up the lighting position and other three diodes light up progressively as the bike wins tilt, taking this information to the IMU unit. It also changes the backlight, fully LED. The core group is slightly wider, with the position lights on the outside surrounding the braking, and both sides three diodes make intermittent.

Finally, the instrumentation also has been retouched, adopting the same typeface in the left tachometer used in the R series and using Crystal glareproofed on the central display.