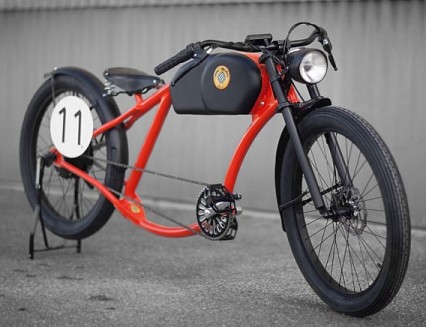 The Barcelona Factory Oto Cycles has become known for developing unique electric bikes that combine the latest technology design with the first bikes of the last century. This mixture achieved results in a unique and innovative product. In recent years, vintage is everywhere. And the automotive world is no stranger to this return to the old taste. This time we find the Oto Cycles electric bikes. With a look inspired by the bikes of the century, technologies is up to date and get some great features for riding comfort through the streets of the cities.

According to the designers of Oto Cycles “To be made by hand you will not find two Oto Cycles equal and coupled with extensive customization of colors, tires, seats, motor, battery and other components are guaranteed exclusivity of Oto cycles”.

Along with exclusivity, design a speed up to 25 km/h, and a range of 60 km make the Oto Cycles means elegant and highly functional urban transport. The Barcelona Company manufactures a range of electrical comprised of three models: E-RetroV, Otor and Otok. The latter two are having a look more biker.

Both the Otok and the other shares the same propulsion system and most of the components, but they have big differences in terms of design. While Otok has the longest tank and high saddle, the Otor has much lower, elongated and with a look at the motorcycles speed on track at the beginning of the 20th century.

In both models there is the option of an engine that develops 500 Watts up to 42 km/h. With the PAS system, which incorporates both Otor and Otok, it is possible to combine cycling with the electric motor for greater autonomy. Among the equipment highlights LED headlights with a retro touch and chrome tank cap of vintage motorcycle from 1936.