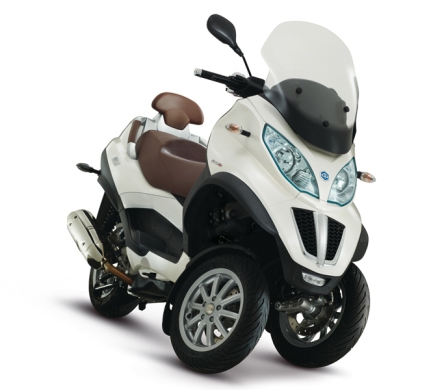 The popular “three wheels” Italian has undergone slight changes such as a new USB for connectivity PMP (Piaggio Multimedia Platform) and aesthetic touches in Business and Sport versions. The “Italian Giant” MP3 has sold 130,000 worldwide, a success that has been possible mainly thanks to the LT and its approval to be driven with car license, whether of the displacement that is.

A Business version has incorporated a new USB port, essential to run the compatibility PMP (Piaggio Multimedia Platform) system that premiered on X10 and it works for almost any smartphone. Through an application the phone becomes a complete onboard computer which shows large amount of information as the tachometer, consumption, or the power and torque delivered in real time, among many other things. The Sport version shares with the Business the changes mentioned above. Also added aesthetic touches such as new handles for the passenger or radiator cap. The top of the footrest has been covered with non-slip material, in turn both the center tunnel as a new handlebar exhibit glossy black. The chromatic range of Sport has also been updated with new matte black colors and gray and white, both with black seat.