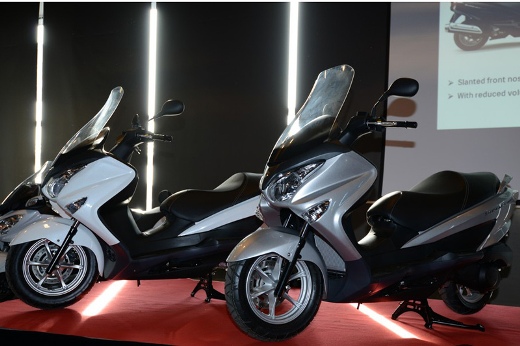 It was unveiled the third generation of small Burgman 125 and 200. It was in Le Mans coinciding with the 24-hour race, and the main changes are a new body and incorporating a version with ABS. It was quite a surprise for those present at the planet most famous endurance race, the 24 hours of Le Mans. Suzuki had said that it was going to show their new 2014, all had were going to see the new V-Strom 1000, but no one expected that they would also be new small Burgman.

It’s a major release since we talk about one of the scooter best-selling in the prolific segment of 125 cc, the only one that does not fall in sales month after month. It is precisely this good reputation that has made has undergone slight changes as a new aesthetic. All plastics are new, in addition to the optics, now has a certain air to the Burgman 650.

But perhaps the most significant change in the braking resident will be combined to be independent and ABS system adds two independent channels. The control panel is also new and will provide much more information through a digital display.

This third generation of the Burgman 125/200 is manufactured in Thailand, but that no one should think that this is going to make it cheaper, indeed expected to be more expensive than the current one.