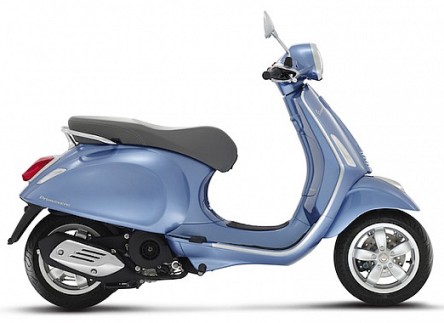 Following the launch of the exclusive 946, it’s the turn of renewal to the LX range of brand and for this they have developed a new scooter bearing the name of one of the most successful models of the 60s and 70s: Vespa Primavera. First introduced in 1968, the Vespa Primavera with small body marked a milestone in the history of the brand. It aimed at those who wanted a more manageable, flexible and small scooter quickly became the Vespa preferred by young people.

Primavera comes at an important moment in the history of this scooter. With sustained growth for years, the Vespa boasts a current unprecedented success, which clashes with the figures crisis of recent times: 58,000 units manufactured in 2004, 100,000 in 2006 and 122,000 in 2009, so far 2013 have been delivered more than 146,000 units, which will, later this year, a new record in sales this scooter.

The new Vespa Primavera comes with several engines in various displacements: as mopeds will be available in 50cc 2T and 4T and of course there will be a 125cc with the new 3V engine that we already know of the latest version of the LX, LXV and S and 150cc, also “three valve”.

Freestanding steel body, as it could not be otherwise, of entirely new design, with lines that recall in some details to the exclusive and expensive 946, Primavera seeks to recover the values of youth, agility and innovation already contributed that old Vespa 60s.