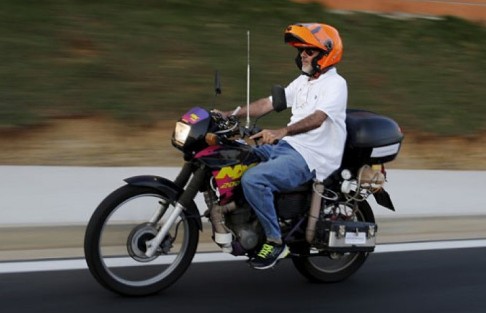 Calculations of the large oil companies warn that at this rate for the year 2050 oil supply will begin to be a problem at the global level. For it is time to design incidental systems of propulsion to the gasoline, something that is not going to catch Brazilian Ricardo Azevedo with the changed foot. This officer takes time to move with a bike that has renamed T Power H2O, since it moves only through the water. Azevedo has adapted a modest Honda NX 200, which has coupled it with his knowledge of chemistry a system that allows separating hydrogen from oxygen, the two components of water through electrolysis. This hydrogen is used to power the engine.

It’s nothing new, as the automotive industry takes at least a decade working hard to get the hydrogen to be a viable energy source for vehicles. The problem is that hydrogen is highly volatile and flammable, so it does not offer the minimum standards of safety in case of an accident.

500 kilometers with a liter of water
Azevedo is still working on its prototype, although some of its tests have allowed him travel about 500 kilometers leisurely with only one liter of water. Not only it is a source of renewable energy, but the emission of harmful gases into the atmosphere is minimized. It would also billions of losses for large companies; it seems that for now such prototypes have no clear commercial viability.