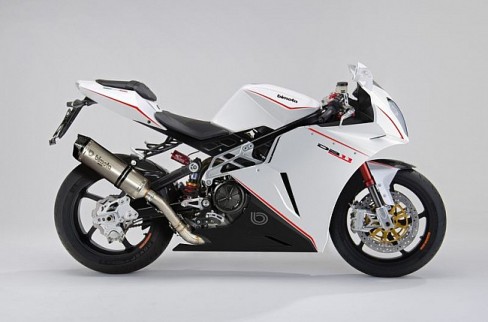 The latest superbike of exclusive Italian firm maintains the basic features of the saga that began with the DB7. Inherits the Ducati 1198 engine and is complete with a turbocharged version called VLX. The BB2 with engine S 1000 RR was also another submitted gems. The mark of Rimini, which next year celebrates its 40th anniversary, the entire catalog displayed in the Hall of Milan, demonstrating that remains as unique as ever and minority.

One of its main innovations was the DB11 equipped with the engine of the Ducati 1198 Testastretta, something usual in this latest generation of models. The 165 HP serial joins a new electronic fuel injection system mapping Athena with a redesigned by the engineers at the house italian, in addition to an exhaust system itself. The chassis-rocker is the same as the DB9, with Marzocchi fork and damper Extreme Tech. For completeness, it is resorting to some Brembo brakes and rims slab of OZ Racing.

To complete this DB11, Bimota VLX also has released a turbocharged version with a dual turbine system that reaches 190 hp.

Furthermore, Bimota surprised everyone with BB2, the second model of history with BMW (the BB1 equipped at the time the single-cylinder of the F650GS).