The new Yamaha MT-09 could revive to the TDM850 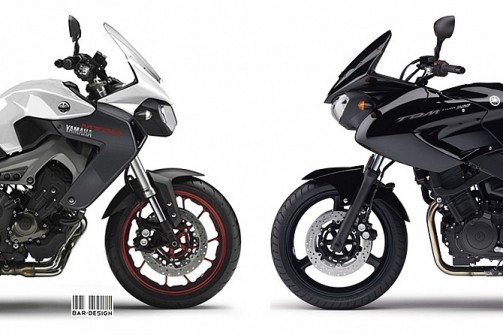 The new Yamaha MT-09 could revive to the TDM850

The launch of the Yamaha MT-09 has captured the imagination of many designers. One of them, Luca Bar, has reinterpreted the concept giving it a more tourist, the result is a new Yamaha TDM850! Surprise appeared a couple of weeks ago. From one day to another Yamaha pulled off one new model: Yamaha MT-09. The surprise was twice, the first, no one expected because neither had been shown in lounges, or filtering any photo, the second, which premiered the first three-cylinder engine of new generation of the tuning forks signature (the first XS850 from 1981).

The appearance of the MT-09 has made think a lot of people, their aesthetic is unlike any other model and not just Yamaha but the rest of the bikes in the market. This always does “wake up” the curiosity of designers; many of them are released to reinterpret the model.

It is what has made Luca Bar, Bar Design Study. Based on the Yamaha MT-09 has superimposed one fairing and a small dome, in addition to a side cases, in what could be a tourist version of the model. But it goes further, since to have completed the front design has proved to be very similar to another model of Yamaha that stopped making it a few years ago: the Yamaha TDM850 (although in the last version was renamed TDM900). Hence, the designer has christened the Yamaha MTTDM.

Same aesthetic and same engine displacement, everything fits. It is not unreasonable to think that we could be facing a resurgence of TDM.