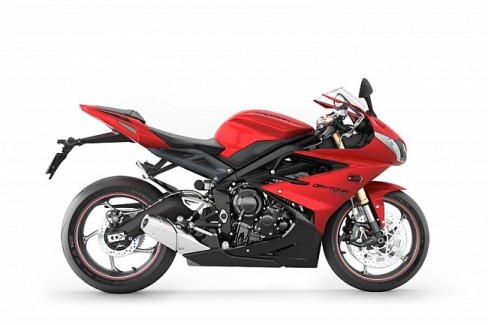 Both bikes now have a new engine and chassis, new fairing design with sophisticated lines, clutch debounce and lots of improvements based on the successful precedent.

DAYTONA 675
The new Daytona is 1.5 kg lighter and more powerful than its predecessor. Work at a higher rpm range, and offers better accuracy and touch with a markedly increased agility. Its 128 CV engine (126bhp, 94.2kW) with a maximum torque of 75 Nm (55.3lb.ft, 7.63kgm), 3CV and 2Nm more than its previous version. The new three-cylinder brings increased performance and new more subtle due to the larger diameter of the cylinder and a shorter stroke.

These changes result in increased speed limit to 14,400 rpm, increasing the effective power and speed range, because now the peak power arrives at 12,600 rpm, with a constant delivery along the entire curve. To enable these improvements, Triumph’s engineers have equipped the 2013 model with a new aluminum engine block with ceramic coating in the cylinders, providing greater strength at high pressures.

The new exhaust system, which is located under the engine, has allowed greater mass centralization, ahead of the weight towards the front, which has been key to getting a bike an agile and stable at high speeds. Something that also helps the new chassis, more robust and with fewer parts, which presents a sharp geometries and minor distances between wheelbase. The subframe is now high-pressure die cast aluminum.

The improvements in the transmission of 675cc Supersport make this model a motorcycle even more stable and secure. The new anti-rebound clutch offers a softer feel at the lever and prevents the rear wheel from locking in hard braking, also thanks to the action of the control unit in the engine management system, which opens the throttle butterflies to reduce engine braking.

To get all the juice to Daytona, Triumph has modified the suspension system, incorporating a new Kayaba inverted fork and a revised rear shock. The lightweight wheels are shod with Pirelli Supercorsa tires.

The driving position and ergonomics has also been slightly modified thanks to the reduction of 10mm seat height, which in addition to improving the control at high speeds allows it to charge less weight on the wrists.

The new fairing design has more slender, sharp lines, with a divided front that adds an air of elegance. The attention to detail has moved to a new level thanks to elements such as the fixation of license plate carrier to the subframe, which is easier to remove face a day of batches in circuit or completely revised instrument panel.

The latter has an LCD screen that features digital speedometer, analog tachometer, fuel level indicator, trip computer, timer/counter and gear position indicator. The review panel also allows tire pressure information offered by the TPMS optional system when it is installed; as well as adjust the status of the ABS in the models that the equip. For additional security, the new Daytona includes immobilizer as standard.

DAYTONA 675R
The Daytona R version goes a step further. Equipped with the best components on the market the 2013 Daytona 675R increases its performance and aesthetics sport. Its Ohlins suspensions, including TTX rear shock and NIX30 inverted forks, provide R version a wide range of adjustment options depending on the needs of the rider.

This version also has standard ABS detachable to adapt the bike to any driving situation and the rider’s preferences when this triggered their powerful Brembo monobloc calipers. The R version also has a quick change “Quickshifter” series, which has been enhanced for 2013 with new software much more effective at low speeds.