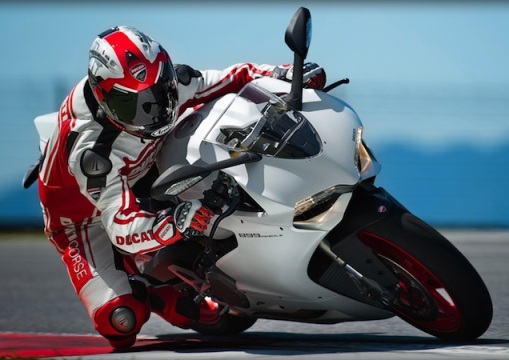 Audi asserts its rights and advances the presentation of the new Panigale 899, which was unveiled at the Frankfurt Motor Show and not at the EICMA in Milan, as expected. One of the most repeated rumors in recent weeks has become official: Ducati Panigale 899, replacement for the 848, was presented at the Frankfurt Auto Show. And as overtook a few days ago, the new Ducati uses a new double dump into a chassis that uses the engine as a stressed part, a part superior aluminum monocoque and body of “Panigale family”.

There are also suspensions of updates. It employs a 43 mm Showa BPF fork and the rear shock, the original system of lateral rods of 1199, is now supported by a Sachs shock absorber. Of course, both trains are fully adjustable. In the brake system, the Panigale, with Brembo Monobloc M4.32, comes standard with a very sophisticated ABS Bosch 9MP system, even able to “measure” the lifting of the rear wheel braking to stabilize. This system has three modes programmed intervention associated with “riding mode” that the pilot can program. In “Race” mode, the ABS only works on the front.

As for equipment, some interesting changes: the new 899 has of course the system DQS (Ducati Quick Shift) and DTC fast change, traction control system already known from other models of the brand, with 8 levels of regulation. Of course, the 899 comes with 3 “riding modes” predefined (Wet, Road and Race) where the bike takes its values determined in ABS, DTC, DQS systems and instrument panel, which display changes in each mode.