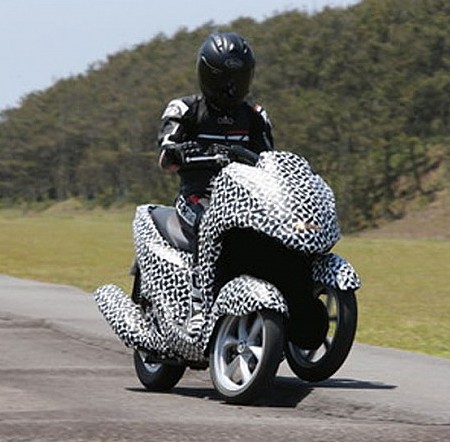 The mark of the tuning forks presented next year its first three-wheeled scooter. With this new model Yamaha will become the first Japanese who committed this segment, following the steps of Piaggio, Gilera, Quadro, Adiva and Peugeot. The market for three-wheeled scooter is booming, and Yamaha did not want left behind. Although not named as we have seen pictures of the new scooter that the firm presented at the EICMA in Milan and you can buy next year 2014.

At first glance, this scooter stands out for its sharp and sporty style. In this model the two front wheels have independent fender. Like all three-wheeled scooter is a little wider than normal wheels and even remain standing upright so you do not need support for the foot when the bike is stopped.

The engine still has not given any hints but everything seems to indicate that it might be the same TMAX 530cc twin-cylinder, with a power to be around 50hp.

First was the Piaggio MP3 in its various versions, then the Quadro, and the most recent of all, the Peugeot Metropolis. With the release of this Yamaha scooter, which still do not know the name, the three-wheel market could be established as a solid choice for city commuting.