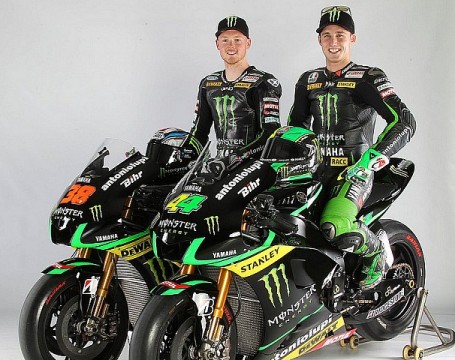 Yamaha Tech 3 made its official launch today, before starting training under the Qatar circuit. With the already typical black and green image of the bike, according to the colors of its main sponsor, Yamaha Tech 3 and their pilots are ready for the 2014 season. Bradley Smith, Pol Espargaro and Herve Poncharal, team leader, presented the final decoration that during this 2014 displayed the fairings of the YZR-M1 which on paper should be one of the strongest MotoGP 2014 panorama satellite teams.

The energy drink Monster Energy wills also this year the main sponsor of the team. Together with Monster, which will occupy major spaces in fairings and APE’s riders, will be the group’s brands Black & Decker (DeWalt and Stanley), Antoniolupi and Motul, as in previous years. New this year is the addition of Sakura and Bihr to decorate the Yamaha Tech 3, who trust in the possibilities of this team.

According Poncharal, team manager; expect to be in the top five as soon as it starts the championship, next March 23 in the evening, at the Losail International Circuit.