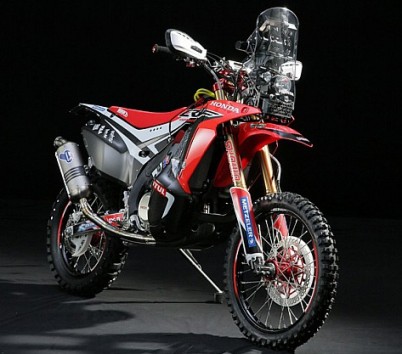 Honda has just introduced the Honda CRF450 Rally with the TEAM HRC will compete in 2014. Frame with Joan Barreda held next Dakar as disclosed. We know what will be the bike that the TEAM HRC held next Dakar 2014 in Argentina, Bolivia and Chile and beginning on January 5 in Rosario (Argentina). Team HRC officially returned to competition last year after 24 years of absence, it was with a prototype derived from the CRF450X enduro.

The latest edition of the Dakar served Honda engineers to develop this new model, especially in matters of maximum power, aerodynamics, maintenance and reliability. The CRF450 Rally keeps the system programmed fuel injection (PGM – FI) system that has proven its effectiveness and good performance under the most severe conditions given in the last Dakar.

Team HRC participate in the Rally of Morocco, beginning October 13, with the new CRF450 Rally and the very formation of five drivers and five official bikes that will be participating in the 2014 Dakar. The evidence in this race will be used to give more information on the latest technical updates from the new bike before facing the biggest challenge: the Dakar.