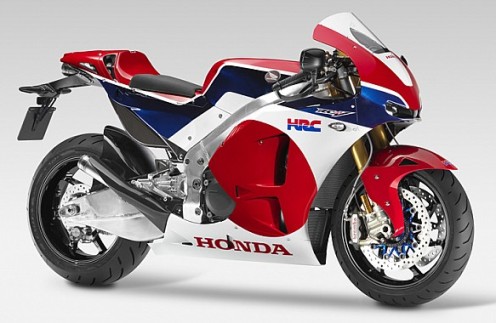 The Japanese respond to stake Yamaha and Kawasaki with an ultra-equipped sports and arrives to compete with the new YZF-R1M and Kawasaki H2R. After many rumors, we know the almost final prototype of a motorcycle that is destined to go down in history as one of those legendary models. The new dream of every passionate about MotoGP racing has arrived, it is the RCV213V-S, a replica of the RC213V with which Marc Marquez and Dani Pedrosa compete MotoGP but with the addition that can run on the street.

In the development of the motorbike the technicians of HRC have intervened directly, the racing department and also Honda Motor, which have created the prototype. This prototype has not yet been leaked any information in relation to their power, capacity and performance, however, at first glance it is clear that this bike is different, at least in appearance, very little of the motorbikes that HRC is open in the MotoGP World.

With fuel tank located under the seat, a very aggressive front that reminds the slanted eyes of the Desmosedici’s street which released Ducati, some mirrors embedded in the handle protectors (something rather disfigures the set) and exhaust outlet that unfolds toward the right side and below the tail, this new RCV213V-S has a personality of which few other bikes can boast.

The machines present two finishes, on the one hand the Honda design with a clear nod to the Japanese flag and other finished in carbon fiber which has entered up in the presentation version of Marc Marquez.