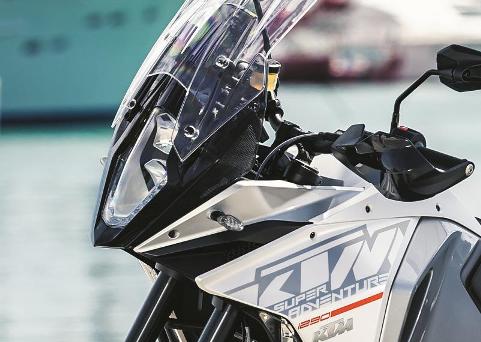 After two years of 1190 Adventure, the Austrian maxi trail has new traveling companion, in this case, driven by the engine of the 2014 Super Duke R. The official blog of KTM has published the first photo of this imposing Super Adventure. KTM did not wait longer to announce its finest trail. If in 2013 the 1190 Adventure revolutionized the segment for its aggressiveness and huge amount of electronics and this year has benefited from the stability control MSC ABS from Bosch, for the coming year the Austrian firm has injected more muscle by creating a new model which will possibly become the most powerful trail of the market. Thus, the Austrian company will have three maxi trail versions: 1190 standard Adventure, R version and Super Adventure.

Besides the new twin engine (do not know if will lower the 180 hp declared the Super Duke R), the “mega adventure” employ a larger fuel tank capacity for extended life in the long haul. Like the 1190, the Super Adventure will feature MSC, ABS, traction control and electronic suspension traction. More equipment and news are also announced in this respect although not specify which ones.

The 2015 KTM 1290 Super Adventure will be officially launched at the Intermot International Motorcycle Fair (Cologne, Germany) next September 30.