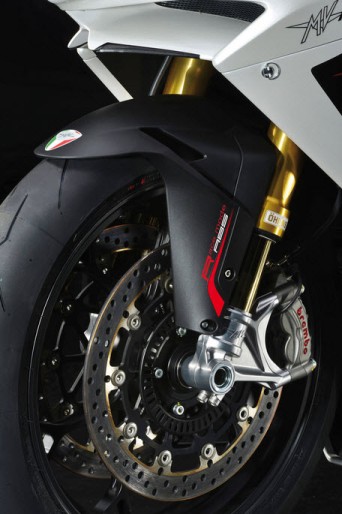 The latest evolution F4 comes with new RLM system, an evolution of ABS that also prevents the rear wheel comes off the asphalt when braking. It has two different modes of operation. The newest F4, the MV Agusta superbike, now comes with a new security system. Its name is RLM and is an anti lift that prevents rear wheel lift under hard braking with the front brake. It can be considered as an evolution of the ABS system, which in this model is signed by Bosch.

The control unit Bosch 9MPlus contains pressure sensors that interface with phonic wheels paths integrated at each wheel. The aim is to reduce braking distance in the wet and slippery surfaces in general. The novelty is that it also prevents the rear wheel deceleration caused by the loss of contact with the asphalt.

This system has two operating modes: “Normal”, with high intrusion designed for road use and “Race” that minimizes the intervention of ABS, more suitable for sporty driving circuit. Also be disconnected.