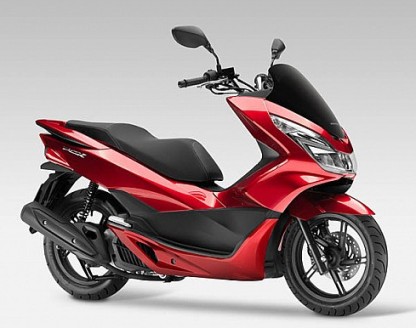 The second generation of the popular scooter from Honda improves the consumption of its predecessor achieving greater autonomy. Maintains its characteristic Idling Stop system and also features a more modern design and complete equipment for €2,749. The highlight on the 2014 PCX 125 is having a more fuel-efficient than its previous version, announcing 2.1 liters per 100 kilometers, figures which substantially improve the Idling Stop system (Stop at idle) connected.

The new scooter Honda has a range of over 375 kilometers, because it has a 8 liters fuel tank compared with 5.9 liters of the previous model.

Also note that the new PCX uses the Idling Stop, a more intelligent system that automatically stops the engine after three seconds be slowing down and put into operation as soon as the throttle is depressed.

Honda when developing this new bike has taken into account the design, getting a more modern and sporty looks, thanks in part to the addition of a compact dual LED headlight. The indicators, pilot and number plate light are also led, thus reducing engine power requirement. Emergency lighting function has also been added.

The PCX 125 has a good load capacity, both under the seat and in the glove. In addition, the left glove incorporates a 12V AC adapter for charging phone.

Despite the changes that Honda has done for this new version, the PCX retains all its versatility when moving between city traffic. Meanwhile, the combined braking system provides smooth and progressive in pursuit of security.