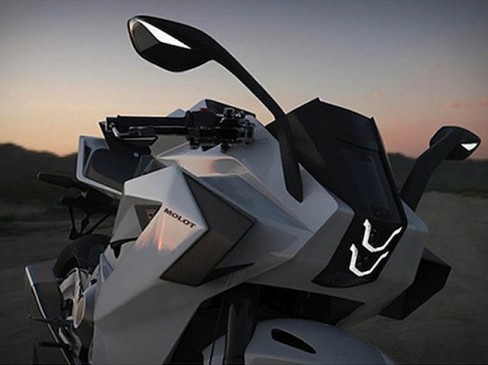 The Russian designer Igor Chak has created which can be defined as the safest motorcycle in the world. Based on the mechanics of a CBR1000RR this superbike is mounted technology that is only used in high-end cars. It has always been the case: cars, with more space, with a more simple dynamics, going on four wheels and, above all, the can afford higher prices, have gone much more developed than the bikes on security issues. Not just develop a stability control for a car, which is already difficult to bend than a motorcycle, whose geometry and shape of bends is far more complex. In addition, the system itself needs space and weight, which is not noticeable in a car but on a bike.

But with money and will, anything is possible. This is demonstrated by Igor Chak, a Russian designer who has created his own company, Chak Motors to manufacture the safest motorcycle in the world: Chak Molot. To create it is part of a CBR 1000RR, except engine and chassis little more is used.

A futuristic body, full of hard angles and seems designed based chisel and hammer. Even so, very accomplished, very original and really striking. And within the body countless security systems although they had already seen in cars, never had been in a motorcycle.

To begin with, and of course, the brake system ABS: that of the own CBR. To illuminate the road and for that you vein the other, all the lights on the bike are LED: not a single bulb in the whole bike. But here ends what you can find on other bikes.

The Molot uses a predictive emergency braking system: carries radar proximity in the fairing and if they detect an obstacle in front of you and that you do not brake, go into action. First alerts you with a bright flash and a vibration in the handlebars. If you don’t case, vibrates more strong. If the system still does not detect your reaction just needed to slow by itself, avoiding collision. It is capable even, if necessary to react in milliseconds, so you can take control if that hurdle is so sudden that you do not time.

Take blind detectors mounted in the tail angles. If you change lanes and detected at that angle this is a car that will start to shine a light on the mirror side that comes to you and send a signal to the vibrating handlebars. Also in case of unintended lane change system warns you: hang when you press the flashing and alerting you to the system that is under control.

Of course, there is a gyroscopic system installed. This detects situations of lack of control and low gas for you. But this system can be switched off if you want. And last but not least the Chak Molot leave permanent record of what happens: HD installed multiple cameras in front and behind the bike recorded during all the time while running or when the bike is stopped, anything that moves to it’s around. This information is recorded in a “black box” installed in the tail, which can be accessed anytime and make copies. The system does not allow deletions, and only begins to clear when it is already filled, giving you time to make those copies.

Impressive, but what of the vibrating alert already made other Russian motorbikes: the Ural also vibrating all the time. Although perhaps in this case do not need sensors to begin doing so.