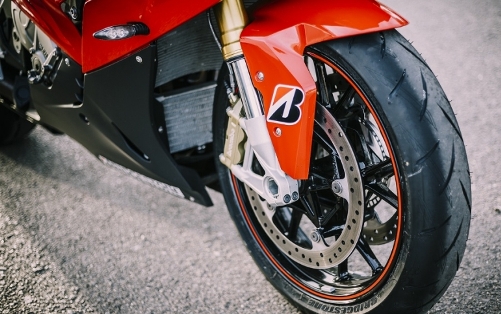 Bridgestone Battlax Hypersport S21 comes to take the place of S20 EVO, which already assumed an evolution on the S20. This new model aims to offer sports bikes a good compromise between grip and durability, something that tends to be opposed. To make progress in these two directions at the same time, Bridgestone has worked with its new installation of Ultimate Eye (UEYE) indoor, so that is the first tire that has benefited from this technology. The U-EYE simulator, which has also been used in MotoGP, analyzes the behavior of the tire contact under different conditions and speeds, and the pressure distribution in the contact area and helps to find the optimal combination of compound and construction of the casing.

The numbers that define the key differences of the S21 with respect to S20 are a 36 per cent of additional mileage and a few lap times a two percent faster, which according to the circuit can reach assume 1.8 seconds. In spite of these data it is a tire designed primarily for road, where that greater resistance to wear makes in optimal conditions can be passed from 6,000 to 8,000 km of duration, with respect to the previous version.

Bridgestone has chosen a very special place to test the performance of this Battlax S21, the Yas Marina Circuit in Abu Dhabi, which hosts the F1. In addition, the testing have done in the evening and at night, increasing the glamour of this presentation. The layout is designed more for cars, but for size and grip is very good to test tires.

The first point that stands out is rapidly heated, which is essential for a sport bike that is used on the road. Circuits are also grateful and have confidence when you take just over half turn. The change in profile, more weevils, and the front tire makes it a little faster than the previous reactions without losing stability. While in the rear opposite happens, has been increased to the outer profile has a greater contact surface and therefore an increased of the grip.

And in the both cases are multi component, three front and five behind. During the test we were able to chat with their technicians, among who was Peter Baughmarten, the person who gave service in the box of the Movistar Yamaha Team, and told us as this same technique using a small band of soft compound in the tire flank has used the above mentioned periods in the racing. In fact it has been the sometimes marked differences between Jorge Lorenzo and Valentino Rossi, as they have different driving styles and the type of compound in this band could favor one or the other.

The new S21 transmits a lot of information to the pilot. This is not an exclusive circuit tire, so if you go really fast can notice how begins to slide progressively and quickly grab that point. Electronic aids for the latest generation superbike help control it, but always are progressive when they lose grip. After a whole day going round and two in the case of Cardoso tires were in very good condition, with little signs of wear, which corroborates that have good longevity for sports tires. So those who assemble these Bridgestone on their motorcycle will roll on road with confidence and if one day they decide to enter circuit will have no problem.

The front can also lead to closer to that of a tire track for an amateur pilot and defuses limit with the bike quite inclined entering curve. Its flexa casing at this point a little more when hurry to the limit but who want to make this type of driving have other options on the mark, as the R10 or V02 slick. The balance therefore is very positive considering that the circuit is not its average, since you can go very fast with them producing minimal wear, simply put pressure 2.3 bar in front and 2.2 behind in hot.