How to easily create the world’s most expensive bike 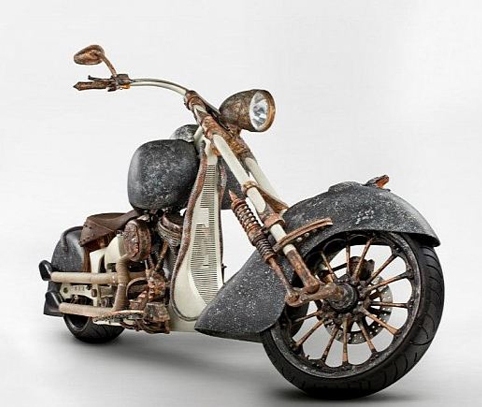 How to easily create the world’s most expensive bike

The white chassis and yellow gold makes this custom a juicy morsel for a super billionaire little concerned about the practicality of motorcycles stored in the garage. The answer to the question in the headline is simple: just make a gold bike. This is nothing more or less what has made the Turkish coach Tarhan Telli, founder in 2005 of the company TT Custom Choppers after forming in this preparations in the United States.

The bike created by Telli weighs 315 kg, many of them thanks to its chassis gleaming white and yellow gold. Mounts a 1,801 cc twin-cylinder engine that delivers 125 hp mated a six-speed gearbox and is, according to Guinness Record specialists, the world’s most expensive motorcycle. Although not the first time a coach builds a bike partly in gold, the previous record as the world’s most expensive motorcycle was in possession of the MTT Y2K Turbine Superbike, powered by a Rolls-Royce Allison reactor that delivers a whopping 320 hp at 52,000 rpm and a 576 Nm at 2,000 rpm. People of Marine Turbine Technologies, its creators also like to say that the purchase price (136,000 euros) also included the fastest production motorcycle in the world.

The difference between the MTT Turbine Superbike and the bike created by Tarhan Telli is that the price of the latter can only be determined on the basis of gold prices in international markets, plus the bonus that Telli decide to add to the final price for their work, which has lasted for more than a year.

Anyway not to be impressed by the figures listed in the Guinness Book of Records. In its pages is also the world’s fastest scooter, created by the British Colin Furze in 2010 adding a turbo to a 125cc engine, the world’s tallest motorcycle created by the American Gregory Dunham, measuring 3.42 meters high and weighs 2.94 tons, or the world’s heaviest bike, a monstrosity of 4.74 tons devised (or committed?) by the Germans of Harzer Bike Schmiede in 2007.