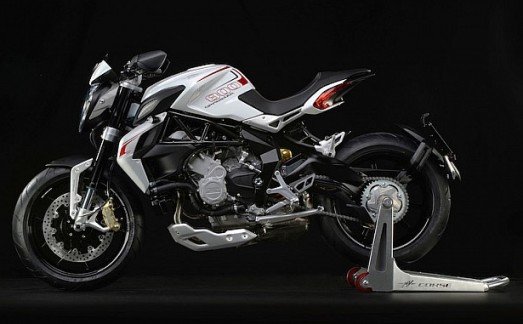 Finally the Italian brand has unveiled the final forms of the new version of its three-cylinder MV Agusta Dragster 800. With the base of the Brutale 800, a more aggressive and original motorcycle. With chassis and Brutale 800 engine, the new Dragster employs a minimalist, very short at the back and “muscular” ahead, bodywork in a very original reinterpretation and some style reinterpretation Ducati Diavel.

And no undue surprises regarding the art of the bike: the same power figures and torque declare that the Brutale (125HP at 11,600 rpm and 81 Nm at 8,600 rpm). In electronics, in addition to the ABS as standard, the Dragster will use the latest version of software (and across the range of three cylinders) the system MVICS (Motor & Vehicle Integrated Control) this system allows the pilot to set up the bike in 4 different modes.

Three of them are “fixed” and named according to the conditions of driving (Sport, Normal and Rain), while the fourth leaves the pilot the freedom to define, within the established limits, all parameters: engine response, speed limiter, sensitivity of the accelerator and engine braking. Of course, it also has a traction control configurable in 8 positions and detachable.

The chassis used the same suspensions that the Brutale: 43mm inverted fork signed by Marzocchi and Sachs rear shock on a spectacular single aluminum swingarm. The rest of the chassis is tubular steel, aluminum side plates. But the most spectacular part is the 200mm rear tire width, unusual for this level of displacement and power.