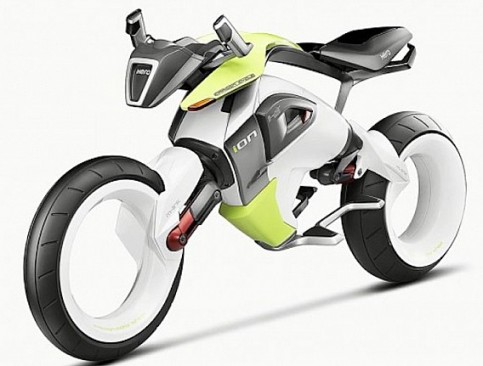 India’s Hero presents one of the most interesting prototypes in recent years: powered by a fuel cell, uses sophisticated electromagnetic systems for your wheels without hub and used auto adjustable suspensions. The Hero Ion is a compendium of new technologies. Presented at the India Auto Expo Show 2014, does not use a single element that you can know other bikes. Logically, short of many years so you can buy a motorcycle, but it certainly accomplishes the objective that has been created: surprise the world with the technological level of the company.

The Hero Ion moves thanks to the technology of the fuel cell. Use lithium batteries but the cathode used is oxygen from the surrounding air itself. Depending on the brand, the ability of energy saved by kilo weight is similar to that of gasoline. But this is only part “of its charms”.

As you can see from the photos, the wheels have hub. They are attached to the fork and swingarm (or whatever you call those pieces in this case) by a kind of bracket for the band of rolling and the rim. According Hero that “connection” incorporates the motors that move the wheels. The two for which it is “all-wheel drive”. And also, the “transmission” and securing wheels are electro magnetic form, such as in high-speed rails monkey. Most science fiction, yet.

Suspensions also have their story. Viscous element working inside (oil suspensions on your bike) is also sensitive to electro magnetic changes. With different load changes such fluidity and thus hardens or softens the suspension. Its pilot, since the box may be varied, but also the state of the road, thanks to sensors, is changing these parameters.

Of course, accelerator, steering (two wheel) and other controls are “ride by wire”. The bike carries sensors everywhere and can analyze your environment and traffic around and adjust accordingly. Gyroscopes, accelerometers, and other sensors provide stability. And a helmet with integrated display is part of the implementation of the Hero Ion.