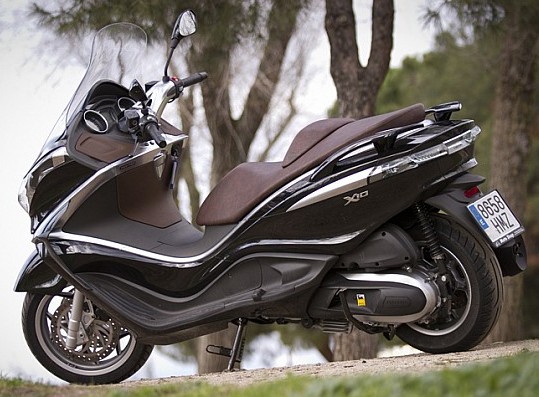 A Piaggio scooter can not be anything. When a leading brand renews its “flagship”, has to be noticed and not just follow market trends. With the X10 range has created something new and its 350 represents the most balanced option. The X10 is a large GT scooter, very equipped and the second of the Piaggio range to employ the new 350 cc engine, after the Beverly 350. In stationary appreciates frontline finishes and special care in the design of all components. If you’re going to move in standing, the first thing that stands out is that the parking brake is on the side stand, an innovation that we have seen in the BMW scooters and even “bugging” a little at a time move it off (can not let the leg extended in case you “escape”), it is clear that security is an important measure when you park it … and do not forget to cast brake.

And if you put the contact in the garage, in the dark you’ll see the new blue backlit controls: as the buttons on the dashboards of cars, but an absolute innovation in the motorcycle world, and not just to make pretty (something that gets) if not that also allow to find them commands with ease in the evening. By the way, that chapter of lights also include the rear lights and LED front position lamp.

Much space under the seat, enough for two large helmets and leaves room for more things. In the X10, for the first time in the Italian maxis manufacturers, not using double opening (for the seat and the “hood” rear) that led from Hexagon to the X-Evo. In case you need more space, front has three gloveboxes. Before your eyes, a box with two spheres and a large digital display, full of information and under the handlebars a “string” of buttons from which you open the seat, gas cap, disconnect the ASR system or turn on the emergency signals.

Below them, in the shield, next to the ignition key, you can see two false buttons without using: are the regulatory systems of the electronic suspension that their “elder brother” the X10 500 leads. Another “little button” that you’ll notice is the pineapple right: put “ECO” and is the one that switches between the two modes: standard or “full power” and an economical way trying to save fuel by lowering engine performance.

If you keep looking at the new X10 you’ll attract attention in the upper left corner of the shield inside a beautifully designed logo that tells you’re on a X10 with ABS and ASR. Indeed, Piaggio gives you the option of choosing a standard X10 or the Executive, whose differences are these security systems.

The ABS, as you can imagine, acts on the brakes and is effective. Little “intrusive”, you will barely notice its presence in normal conditions. The X10 takes braking were very quick and when combined with the left lever operates the rear brake and part of the stopping of the front axle. Braked very well, with good touch and with the security of whatever you do will not block any wheel, but as always with these systems, advice is to always ever with both shifters (right brings the rest of braking the front axle). In this case, the X10 system is well balanced and always keeps a touch very correct.

Most curiosity will awaken the acronym ASR. It is anti-skid system that causes any loss of traction engine “cutting gas” by itself until the scooter regains good grip. It is based on the ABS sensors themselves, but in this case when the system detects that the rear wheel accelerates more sharply than it should report to the engine controller which turns momentarily so that the bike can recover traction. Obviously the system needs to disconnect: can you imagine that you have the bike parked on sand and it rain? You could take it out if there is any ramp, since the sliding system will cut the engine. So there is a disconnect button on the dash.

The X10 is one of those scooters that “trick” your senses. For starters, when you see it looks more massive than it is. Perhaps the rear, sharp and lower than normal or the lines as fluent make it seem long and, with it, very large. But it is a scooter which comes close to the ground, handles well and well balanced weights, so it does not cost too move in standing. Turn enough, which is something nice to maneuver and move around town, where despite its size moves acceptably.

Piaggio has done a great job, as expected. The X10 350 is certainly one of the best scooters in its class, both for equipment and for completion or performance. In performance, closer to 400 cc of what you would expect, it has nothing to envy of any scooter in its class and surprisingly also the ease of movement of which it is capable. However, a price also closest to the size of the 400 more expensive than the 300 zooms out of “dreams” of many stakeholders.