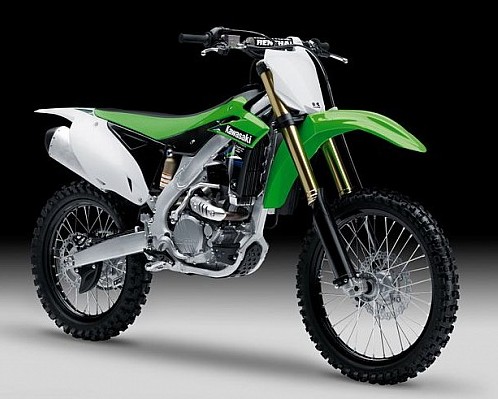 The Californian pilot (three-time AMA SX450 champion) and British Tommy Searle (2nd in the World MX2 2012) are the architects of the new street crosser of the green signature. It highlights the electronic control system and fork out the 250 SSF. The prototypes were left seen in the Japanese National Motocross and Kawasaki has just announced its launch. For the KX250F, the big news is the addition of electronic output control, an innovative solution in the MX2 category. The system delays the ignition in the first and second gear, getting less torque reaches to the rear wheel. Once you climb to third, the system shuts down and returns to normal ignition map. The goal is to pull the maximum and minimum output skidding to a stop. It is activated by a button located on the handlebar.

The Kawasaki KX250F also debuts the front anchorages engine, new grips handlebar, different shifter and the pins of the sprocket gearbox, and new settings for SSF Showa (Separate Function Fork) front fork and configuration of the Uni-Trak rear suspension. The accelerator has been revised to work better in the transition from full-open closed, improved idle and low gain.

With respect to the Kawasaki KX450F, not much. Its keep all the improvements made in version 2013, with slight adjustments in the injection and keeping the Kayaba PSF fork, stiffer swingarm and output control (which debuted in 2012).

For fans who want to further refine, there will be an optional calibration kit injection (KX FI Calibration Kit) for both mounts. Kit contains KX Racing software, the ECU controller, valve and mounting brackets, and a USB cable. In addition to the kit, the only thing you need is a computer and a 12V battery.