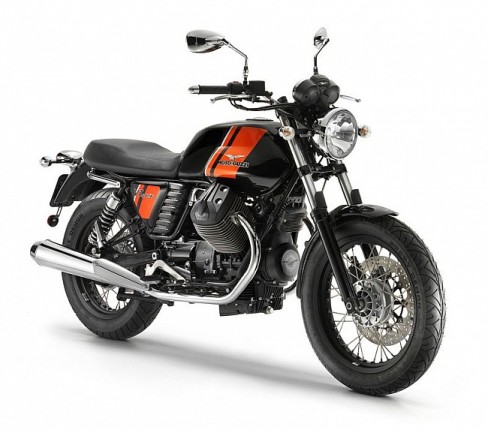 These are two new versions of the Eagle brand, which launched in 2013 with the arrival of two new models of California 1400 Touring/Custom and associated with an exceptional image, the Scottish actor Ewan McGregor, witness of exception of the launch of the new motorbikes of the manufacturer. The Moto Guzzi V7 motorbikes has a change of image which leaves the dual tone to adopt new graphics, inspired explicitly in the historic 750 Sport S/S3 whose production data from 1974 to 1976.

The new design, called “Essetre” (S-3) has bases in metallic silver color with black stripes, very elegant and refined; or black with orange stripes, following closely in the footsteps of its predecessor, grants a classic and sporty air.

In both versions of the logo on the fuel tank comes in relief, while the wheels are finished in black instead of chrome. Both chassis and mechanical parts remain unchanged: the double cradle frame is a classic V-shaped with the small block engine with 90° cylinder completely redesigned in 2011 in order to obtain a higher thermodynamic efficiency, by so the only notable change is the new injection Magneti Marelli 38 MIU3G. Moto Guzzi Norge GT8V
The main change in this model can be seen in the new graphical silver band that runs through the fairings and that can be selected based on two color schemes: the new “mahogany” and white or “pearl”.

The chassis and mechanical part remained unchanged, with a sturdy structure of steel grating in the aluminum rocker that incorporates the famous CA.RC, the final drive by universal reagent. The 1,151 cc engine has a “Four valve” equipped with oil cooler and exhaust system equipped with a muffler louder.