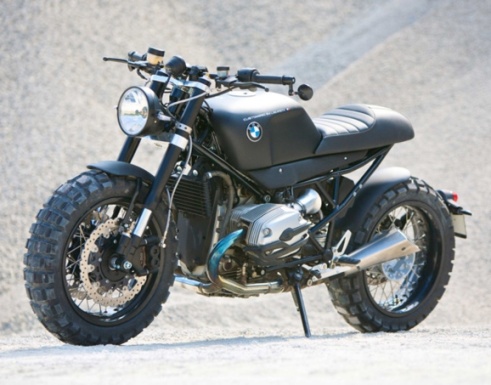 Only one coach from the likes of Ludovic Lazareth is able to create a new category via one of their preparations. This BMW R 1200 R has been classified as a “neo-retro scrambler”, hopefully the first of many. The prestigious French coach Lazareth already know from other creations, one of the most talked about was Yamaha T-Max that left us open-mouthed.

This time we want to show this spectacular BMW R 1200 R to which the creator himself refers to it as a neo-retro scrambler. Since then it has traits scrambler bike, no more than take a look at aesthetics and those knobby tires. To the ordinary mortals can seem a brutality, but for what is usual Lazareth, is a bike fairly discreet.

From the original bike is only the boxer engine and Paralever rear suspension. The tubular chassis is completely handmade and telelever striker has been replaced by a range of origin of a Yamaha YZF-R6, whose bars have been opened to put the front tire, a Continental Twinduro.

One of the objectives of the coach has been mixing the classic BMW cafe racer style with a modern touch and aggressiveness. The seat is one of its most distinguishing features. Boxer engine are two Ixil exhausts with two aluminum silencers. In terms of instrumentation has been reduced to a minimum with simple digital speedometer, mirrors are mounted at the ends of the handlebar.