Goldfinger, gold and diamonds for the most expensive bike in the world 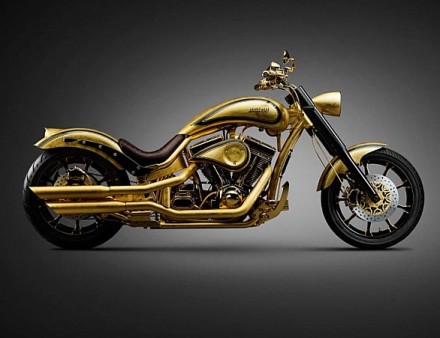 Goldfinger, gold and diamonds for the most expensive bike in the world

It is original, but it is also true that it is for a very specific type of audience. More than for reasons of taste is the Pocket which separates the buyers of this jewel of the two wheels has been sold for a whopping $850,000, which has become the most expensive bike ever. The world’s most expensive bike has a new owner. Although it is unknown who was the lucky (a term never came better to describe someone with so much money). This artifact was created by the design firm Laug Jensen, a Danish company dedicated engineering for a long time to build and sell motorcycles, boats and other parts with a common denominator, the luxury.

Although usually working under order, the machine in question was created by the people of Laug Jensen without any request. Makers of the brand decided to risk and create this bike, a beast made ​​of 24 carat gold and more than 200 diamonds. What if it was some waste, the leather details with which the motorbike is provided are of crocodile. Practically all parts of the bike were bathed or coated in gold, with the exception of the details in black. When everything was finished took the Goldfinger (this is how they called it their creators) to Monaco and Dubai, where it was finally sold.

With everything counted almost seems that $850,000 is not much and taking the price of a gram of gold. There are not known the technical characteristics of the device, which will not go on to the history for being a technically sophisticated bike, or how to consume 100, even sure if you can pay this outrageous for a bike not lend much attention to the price of gasoline.

Laug Jensen are already worked in another exclusive model and intended to sell it for a million dollars.