The Honda CB 300F is a reality 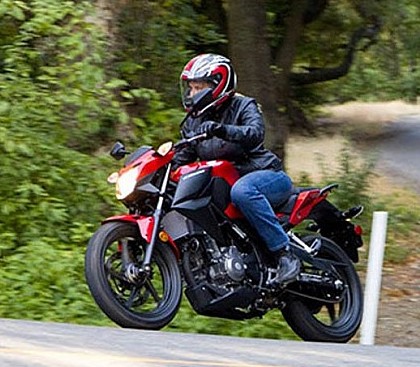 The Honda CB 300F is a reality

Rumors are over. Honda has officially announced the new CB 300F, the naked version of its CBR 300R. The Japanese brand is committed, thus the segment bikes start at A2 card. Currently, this model is only sold in the American market. The Japanese firm has released the first details about what will be its new model in the market for low displacement motorcycles: Honda CB 300F. A naked mount for a segment of trendy at the moment. The lowest price, comfort driving, the facilities at the time to keep them… make this type of motorcycles in ideal for a large proportion of motorists and also can lead to the A2 card. For now, the Honda CB 300F will be marketed starting next fall only in North America and its price is $3,999 (€2,938).

On the technical side, the Honda CB 300F has similar elements or identical to its sister sport: CBR 300R. It incorporates the same engine 286cc DOHC single-cylinder, four-stroke, 6-speed gearbox. It also incorporates the chassis, the brakes and suspensions of sports model.

In contrast, in the outside appearance if there are modifications. Its will have removed the fairings and replaced has been replaced the double headlight of CBR, by a single focus. There are also changes in the position of the handlebars and footpegs, highest, to provide a more comfortable driving position. This feature along with its 13-liter tank and 780 mm seat height, make the CB 300F in an ideal bike for everyday driving.