The new Hesketh 24, on sale in February 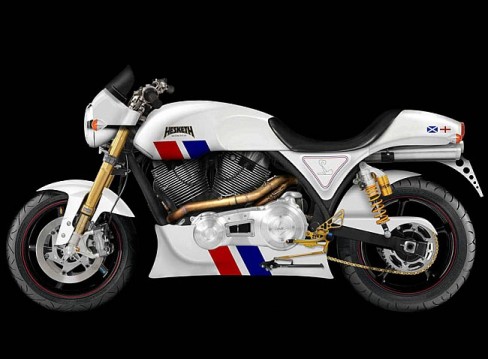 The new Hesketh 24, on sale in February

Every year appear new prototypes of European motorcycle manufacturers and at the beginning of the next hit the market a new saddle for the reborn british Hesketh brand. In the mid-1980s Hesketh motorcycles ceased to occur. However, thirty years later they could rise again, this time thanks to the efforts of the British entrepreneur Paul Sleeman. Thus, the first model of the brand would be called Hesketh 24 and the first units will be delivered to their owners during the next February.

Although it can be that this history is unknown to many young readers, Lord Thomas Alexander Fermor-Hesketh founded in 1972 his own team of Formula 1 driver James Hunt, achieving several victories over those years and achieving fourth place finish in classification in 1975 with the Hesketh 308 prototype. Nevertheless, in the following years would stop all four wheels to design their own motorcycles, particularly highlighting models Hesketh V1000 and Vampire.

Aesthetically, the Hesketh 24 retrieves color inspiration from the prototypes of F1 in the early 1970’s. The Hesketh 24 may seem difficult to classify within the industry today, but will be powered by a V-twin engine of 1,950 cc and 120 hp. The chassis will have a double cradle frame in chrome-molybdenum tube of circular cross section, Ohlins suspension (inverted front fork and dual rear shock train) and front brakes with Beringer four pistons radial calipers. Emphasize other aesthetic details, such as carbon fiber rims of BST, the fuel tank of 22.7 liters under the engine or exhaust manifolds with two and three outputs along the rear tail.